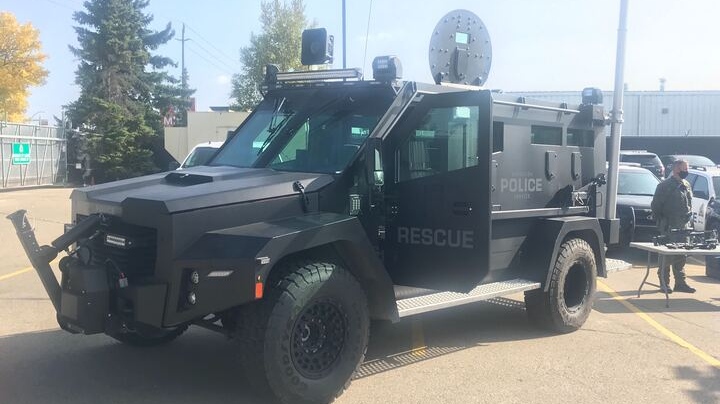 The Edmonton Police Service (EPS) has unveiled two new expensive vehicles for use around the city.

The second is a "Cambli Blackwolf" armoured vehicle which cost $500,000.

Edmonton is already one of only three cities in Canada with more than one armoured vehicle (Calgary and Toronto are the others).

The Cambli will replace a 1978 Grizzly that the Edmonton Police got from the military, while the second armoured vehicle, which the City intends to keep, is a Ballistic Armoured Tactical Transport from 2003.

The purchase appears to have caught some council members (and the Mayor) unawares.

"In none of our reports was this specific purchase detailed", Mayor Iveson said.

For those who don’t know what a Cambli Blackwolf is, here's what the Blackwolf is specced as:

The Cambli Blackwolf design is based on 4x4 Ford F-550 truck chassis with the engine at the front, the crew in the middle and the troop’s compartment at the rear. The front of the crew cabin is fitted with two large windscreens offering good visibility over the frontal arc for the drive and the commander. Rapid entry and exit for the crew is via two forward opening doors in each side of the hull. Each door has bulletproof windows with a firing port mounted in the lower part. The sides of the troop's compartment are fitted with two bulletproof windows and firing ports. The seating arrangement of the Cambli Blackwolf can be configured according to the user requirement but is typically two individual seats in the front and two benches in the rear, mounted along the hull of the vehicle and facing inwards. There is a large door in the rear that opens to the right and has a bulletproof window and firing port. In option, the vehicle can be fitted with two doors. The internal layout of the troop’s compartment has been specially designed to offer large space and head clearance. The hull and windows of the Blackwolf Cambi offer protection Level B7 against the firing of small arms from 7.62х51 (.308) up to 30.06 AP (Armor Piercing), Penetrator rounds as well as .50 caliber weapons. The vehicle has a length of 6.24 m, a width of 2.43 m and a maximum height of 3 m. It has a GVWR (Gross Vehicle Weight Rating ) of 8,845 kg with a maximum payload of 1,360 kg.

P.S. You can also mount a machine gun on the roof if you need to.

Seems a little excessive, doesn't it?