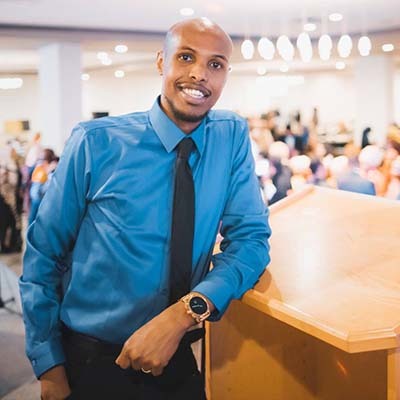 Born in Mogadishu, Somalia, Ahmed and his family first immigrated to Canada in 1991. Thirty years later, Ahmed is now a husband and father of two, and a strong community advocate. His experience on the Law Enforcement Review Board means he values transparency and equality. He has spent time fighting for equity on the Edmonton Arts Council and connected families to resources through the Somali Canadian Women and Children's Association.

As a former City of Edmonton poet laureate, and co-founder of the Breathe In Poetry collective, Ahmed is fiercely passionate about arts and culture. He worked for the City of Edmonton as an African Youth Outreach Coordinator and has spent over ten years sharing his love for poetry with youth across the city. He was also named one of Edmonton’s top 40 under 40 by Avenue Magazine in 2017.

Ahmed currently holds an advisory role on the National Council of Canadian Muslims, is a board member at the Sahaba Mosque and is a community member on the Edmonton Arts Equity Committee. He is happily married to his wife Ashley who works as a nurse at Royal Alexandra Hospital. They are parents to two beautiful girls, aged two and five.

A family man, community organizer, youth worker, public speaker and poet, Ahmed has the background and skills to be your next city councillor. Ahmed is all in for the northside.