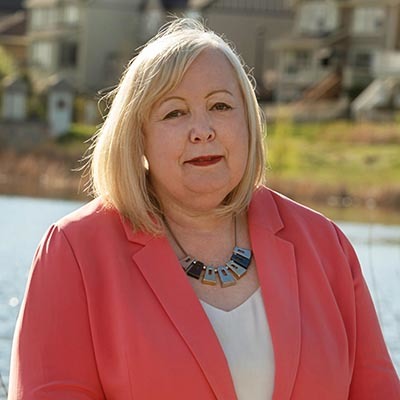 Bev Esslinger has lived in Ward Anirniq for more than 25 years, and has served as your City Councillor since 2013. She has developed a reputation among her colleagues in City Hall for dedication to people and initiatives, level-headed decision-making, and fostering co-operation.

Before being elected to City Council, she served two terms as an Edmonton Public School Board Trustee and four years as Chair of the Board. Bev was instrumental in the development of a Board Strategic Plan and the inception of the Edmonton Public Schools Foundation to give kids every chance at success.

Bev brought her combination of community and political experience to her role on City Council. In the past eight years as your City Councillor, Bev has been at the forefront of initiatives to improve the lives of Edmontonians and build a safer city, including implementation of school zones, transit safety, and gender-based violence prevention. She has served as the city’s representative on the Federation of Canadian Municipaities where she served as Chair, International Relations and Governance Rep for Ukraine.  In addition, Bev championed Gender Based Analysis Plus (GBA+) and its implementation on City policies; parental leave for Councillors; child care policy for City staff; engaging more women to seek work as transit operators and firefighters.

Her commitment to making the City a great place to live is reflected in her work.  Her diverse duties all share a common thread of Bev's passion for helping people to thrive.

Bev is a married mother of two grown children and a grandmother of four.